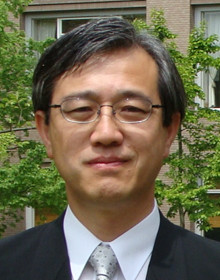 Prof. Hitoshi Tanaka finished his PhD study at Tohoku University, Japan in 1984. After job experience in other universities such as Utsunomiya University (Japan) and Asian Institute of Technology (Bangkok, Thailand), he was promoted to a full-professor of Tohoku University in 1996. He was a visiting researcher at ISVA (Institute of Hydrodynamics and Hydraulic Engineering), Technical University of Denmark in 1996. His main research interest lies in fluid mechanics such as turbulent wave boundary layers, related sediment movement and also resulting morpho-dynamics in costal and estuarine environments. His study sites are not confined in Japan, but covering various countries worldwide such as Vietnam, Thailand, Korea, Indonesia, Oman and Bolivia etc.

He served as a chairman of IAHR-APD (Asian and Pacific Division, International Association for Hydro-Environment Engineering and Research) from 2011 to 2014, and also as a council member of IAHR from 2013 to 2017. In addition, he was a vice-president of JSCE (Japan Society of Civil Engineers) from 2015 to 2017.